A 22-year-old UCC student, Louise Quill, about to sit her finals exams, responded to a notice in the college looking for volunteers for Africa and found herself in Kilimanjaro, TZ. Louise held numerous fundraisers before her departure as the company required volunteers to raise approximately 2000 euro each for the cause. There were many projects on offer from working in schools/orphanages and women’s refuges.

On arrival, Louise was escorted to a village and dropped to an orphanage.  Louise was very disheartened by the living conditions of the infant children in the orphanage as they had no toys, books, little or no exercise. Over the course of the month, Louise became very friendly with a teacher, Monica Tukai, who herself was volunteering her time to help educate these children. She was originally from Kenya but had married a Tanzanian man and had four children aged from 3 to 12 years.

Louise spoke to Monika about her desire to open an orphanage. She had the vision to create a home where the children would be safe, well looked after and educated,  a project where people could volunteer and all funding would go directly to the children. After some chats with Monica and her husband Pastor Tukai, Louise returned to Ireland and began raising money to make her dream become a reality. 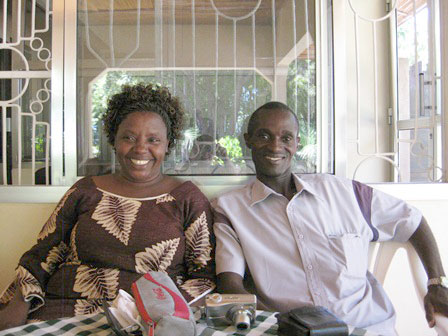 Monika and her husband began the task of clearing out a building suitable for the orphanage. On her return to Tanzania in June 2007, with €11,000, Louise began to put the money to good use. Beds needed to be bought, blankets, everything you could possibly need right down to plates, bowls, forks and spoons. The local police and social services quickly became aware of this new project and soon enough, the children started to arrive. The children that arrived were in need of urgent medical attention. All were malnourished, many of them had malaria, others were covered in lice and scabies, some were suffering from HIV and all of them had just suffered a traumatic event that ultimately placed them in care. Louise fell in love with each and every one of them and made a promise that no matter what happened in her own life these children would always be her main priority. The first ten children that arrived are still living in Tír na nÓg today. Tír na nÓg meaning ‘Land of the young’ is known as Kao La Amani in Tanzania, which translates as ‘Peaceful Settlement’. Louise has partnered with local Pastor Cletus Tukai and his wife Monica (mentioned above) to operate the orphanage, kindergarten and primary school in the town of Boma Ng’ombe. Approximately 50 children aged between 1 – 18 are currently cared for at the orphanage. The current premises housing the orphanage and kindergarten are rented by Kao la Amani and are totally unfit for purpose. As the landlord neither wants to make improvements or sell the property, it is our intention to build a new home on the land already purchased by Kao la Amani and move the kindergarten to our primary school site.